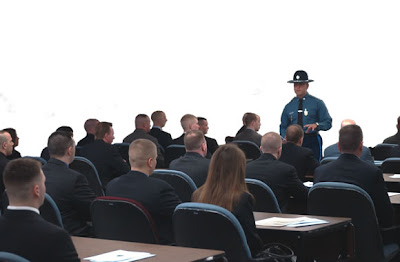 Police recruit training occurs across multiple learning activities; it begins in the classroom and ends with hands-on field experience. Many assume that such training is both progressive and congruent. Within six to eight months, cadets enter and leave the academy classroom to take part in field training. This transition involves consciously leaving behind past experience and identity as a cadet, becoming part of a new organization, and building a new identity as an officer. Therefore, learning is not part of a linear process but, rather, must be extended across the academy and into field training. Although much of the related literature has focused on learning within each independent activity with the belief that individuals will transfer knowledge, there is a growing awareness that organizations should concentrate more on how learning extends or generalizes across activities, as well as how to facilitate it.

The author gathered data from a study he conducted in Michigan in a regional police academy and during field training in a mid-sized department that employs over 200 sworn officers. He selected 10 cadets quasi-randomly based on their prior police experience and whether they were employed by a department before entering the academy. During the 16 weeks of classes, the author observed these participants and collected data from them during structured interviews at various points. He also interviewed academy personnel and instructors, attended a number of classes, and studied daily recruit life.

The Michigan Commission on Law Enforcement Standards mandates a minimum-hour curriculum structured on individual standards for each academy in the state.1 The emphasis of accountability and legal verifiability has resulted in a highly structured learning approach primarily dependent on a traditional lecture-based method in the classroom.
"Many leaders recognize that learning based entirely on lecture is an outdated, inadequate model."

Dr. Hundersmarck, a retired police officer, is the director of criminal science at the Indiana Institute of Technology.

The regional academy in the author’s research used a curriculum that exceeded Michigan’s minimum requirements and consisted of 600 hours of mandated training over 16 weeks. Cadets who attended were either sponsored (prehired by a police agency) or nonsponsored (put themselves through the academy). While most classes consisted of a traditional lecture format, a portion of the curriculum, such as firearms proficiency, defensive tactics, first aid, driving strategies, and police scenarios, involved hands-on training. Recruits spent most of their time in the classroom taking notes and were tested each week to demonstrate aptitude and to verify their adherence to the standards of training. Nearly all police academies practice this behaviorist style of learning2 (an expert provides information in the form of lecture to students responsible for transferring classroom material to the field). Proponents of this method advocate its use based on the need for objective standards and legal accountability. Learning in the academy depends on lecture and less than 3 percent of basic training is spent on alternative forms of instruction, such as scenario-based training or application of skills.3 “Ninety percent of police academy training is spent on task-oriented training.” 4 Consequently, “behavioral techniques do not account for the students’ past experience in solving problems, and the trainer is only concerned about the learning objectives, which are usually carried out in a standardized, linear manner.”5 As such, students have little or no personal investment in what they learn nor is the instruction related to any of their past experiences or future goals.

Many leaders recognize that learning based entirely on lecture is an outdated, inadequate model. In recent years, some professions have moved toward a problem-based approach where learning is more applicable to problems encountered in particular fields. Similar to law enforcement, other professions must weigh the obligation to ensure accountability to legal requirements and standards with the duty of preparing individuals to perform complex duties. Academies should focus on encouraging critical-thinking skills using problem-based learning techniques more reflective of the complex nature of police work, such as changing laws, using technology, and responding to crises. Today, most would agree that a police officer’s duties have evolved from enforcer of laws to a problem solver in the community.6

Many proponents of problem-based learning stress the concept of andragogy.7 In an andragogical approach, instructors assume learners are self-directed. They adapt their teaching to facilitate the learner by using a variety of methods (problem solving and critical thinking) to encourage self-directed learning. By taking into account students’ experiences and strong identification in becoming a police officer, instructors help recruits transfer learning between the academy and field training.

The author determined that recruits with preacademy police experience, such as Explorer, dispatcher, or other nonsworn service, judged classes in relation to their early contacts with police work.8 Likewise, sponsored cadets evaluated what they learned by their growing knowledge of the practice of their future department. Recruits did not view classes dependent on lecture as relevant as subjects taught using scenario or handson training. They judged classes that approximated the nature of police work as more valuable learning opportunities and strongly identified with instruction that compared with the nature of real police work, using their past and projected experiences to gauge the value of their learning. Preacademy experiences had a substantial impact on an individual’s perception of learning in the academy.9 The author clearly observed how classes develop a culture that influences how cadets perceive their training.10 Nonsponsored cadets without preacademy experience judged the relevance of classes by the attitudes and perceptions of classmates who had some knowledge of police work. Informal networks of information between students formed in the beginning weeks of the academy. A learner-centered approach uses the different experiences of the cadets as part of their instruction to facilitate meaningful learning, as opposed to having them rely on informal stories to familiarize themselves with police work.

All of the recruits the author interviewed judged the value of their learning based on whether the classes were “book learning” (dependent on lecture) or “real life” (hands-on classes).11 One cadet noted, “The book learning—it’s a different atmosphere. You’re just reading and listening to somebody else talk.”12 All cadets gave high ratings to scenario-based classes or those centered on such activities as shooting or defensive tactics. Another recruit stated, “The scenarios we did were 100 percent [better] and helped me so much more than the book stuff.”13

Cadets rated crime scene scenarios as the highest learning activity. Interestingly, these were held only one evening, students were not formally tested, and all were problem-based as cadets went to different crime scenes role-playing as officers. Scenarios from the academy remained influential in the recruits’ minds into field training where they reported them as the only academy learning they referred to when conducting police work. Recruits rated this type of training so highly because they identified it with actual police work; identity is a strong aspect of learning, especially for police officers. The author found that the tasks or standards recruits rated low (in the form of classroom lecture) did not always reflect the subject matter but, rather, the presentation and association of it with the classroom.

A constructivist approach, similar to andragogy, is learner centered, incorporates flexibility, and includes reciprocal teaching, peer collaboration, cognitive apprenticeships, problem-based instruction, Web quests, and anchored instruction that involve learning with others.14 Police academies could easily adopt this approach because they use it in crime scene scenarios, and it serves as the primary means of instruction by field training officers.

Learning comes through student interaction, as well as instructor input. In a constructivist approach, the instructor serves as a facilitator who guides individuals and groups in problem-solving and critical-thinking skills. Using scenarios as problem-solving devices relates academy learning with police work and appeals to cadets’ strong identity in becoming a police officer. The constructivist approach also uses the dynamic culture of each academy class and directs it toward learning as a collective. Learning must project forward from the academy to police work and, equally important, recruits must connect field training back to the academy.

The learning environment of field training varies significantly from the classroom. In most programs, probationary officers train for 16 weeks, rotate through at least three phases with as many different field training officers, and enter an evaluation phase. The program resembles an apprenticeship program wherein an officer slowly takes over the technical duties of policing while learning under the tutelage of a field training officer. Field training also is an enculturation process where new officers learn the norms and values of the department (both formal and informal) from veteran officers.15 Thus, they move from a peripheral member of the organization to a full-time one.16

Field training bridges the gap between the theoretical emphasis of the police academy and the practical application of policing that occurs on the streets.17 Such a mediated transitional learning activity involves engagement and discussion that actively relates learning from one exercise to another.18 Academy learning should be aligned and coupled with field training to be truly effective.19 Consequently, any change to the academy curriculum will not prove beneficial until actively mediated in the department.

Some field training officers may negate or dismiss academy learning, making it difficult for new officers to publicly acknowledge and use their past academy experience. One field training officer stated that his approach to training recruits was to “assume he knows nothing about any procedures or police work whatsoever and teach him everything and, hopefully, what he learned in the academy, he can apply most of it here.”21 This statement revealed an interesting phenomenon—prior learning was not formally mediated and probationary officers had to discreetly transfer training devoid of assistance from the field training officer. This proves a difficult task given new officers’ inclinations to disassociate themselves from the stigma of the police academy and become regarded as a member of the police department.

At times, the author did observe new officers using academy learning in field training. Although they actually used procedures and knowledge of laws they studied in the academy, they reluctantly admitted doing so. For example, the author interviewed a probationary officer about his approach to a burglar alarm using officer safety techniques. After some discussion, the officer hesitantly admitted that he had learned his strategy in the academy. Prior to this incident, he never had acknowledged using any academy learning.

In 2003, the Office of Community Oriented Policing (COPS) designed and released the Police Training Officer (PTO) program which upgrades the standard model used by many agencies. The PTO program “incorporates contemporary methods in adult education and a version of the problem-based learning method of teaching adapted for police.”22 It encourages critical-thinking skills more consistent with community-oriented policing. During each training phase, probationary officers must resolve an ill-defined community-based concern using their own problem-solving skills, helping them transfer the process to other issues.23

The PTO model encourages problem solving as a means of field training, as opposed to a focus on individual tasks. It moves away from the behaviorist approach to learning that relies on replication of tasks to demonstrate learning. The implementation of a problem-based model demonstrates the need to change academy curriculum to a constructivist approach to mediate academy learning with field training.

Law enforcement must overcome the inconsistent nature of learning between academy classes and field training, moving beyond an emphasis on separate learning models for training recruits. Agencies must bridge the learning at all levels of training by actively mediating it across the different contexts. Adopting a learner-centered constructivist approach in both the academy and field training will ensure that recruits engage in learning with which they identify.